My Rating : 3.5/5 STAR
MovieStudio Quote >> “Something now makes me re-like Shyamalan. This was a piece of work!”

On one ordinary day, a group of people is trapped in a elevator of an office building. What it seems to be an accident turns out to be happening for a reason as they are threatened by the devil in disguise. Becoming suspicious to each other, they try to come out of the elevator. 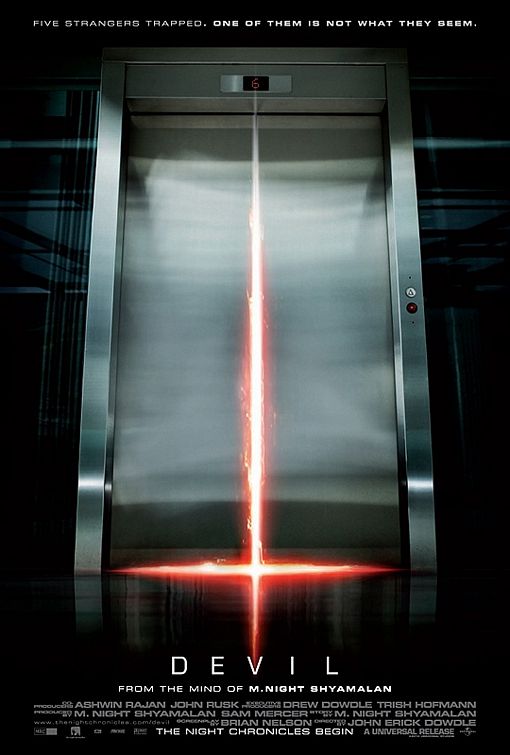 My Rating : 2/5 STAR
MovieStudio Quote >> “A totally predictable flick with quite few scares!”

Academy Award winner Kevin Costner stars as John, a newly divorced father who moves into a rural South Carolina home with his adolescent daughter Louisa (Ivana Baquero of PAN’S LABYRINTH) and young son Sam (Gattlin Griffith of CHANGELING). But when Louisa begins to behave in a bizarre and increasingly violent manner, John must uncover the truth behind her transformation.

Is the former owner’s shocking secret to blame? And how far will a father go to protect his daughter from an ancient evil determined to take her over? Samantha Mathis (THE PUNISHER) and Erik Palladino (ER) co-star in this intense thriller that marks the English-language directorial debut of Luis Berdejo, co-writer of the modern suspense classics [REC] and QUARANTINE.

My Rating : 5/5 STAR
MovieStudio Quote >> “A slapstick comic-strip comedy genre someone would love to watch!”

Based on Bryan Lee O’Malley’s Oni Press comic book of the same name, Scott Pilgrim vs. the World follows the eponymous slacker rocker on his colorful quest to defeat his dream girl’s seven evil ex-boyfriends. Twenty-two-year-old Scott Pilgrim (Michael Cera) may not have a job, but rocking the bass for his band, Sex Bob-omb, is a tough job unto itself. 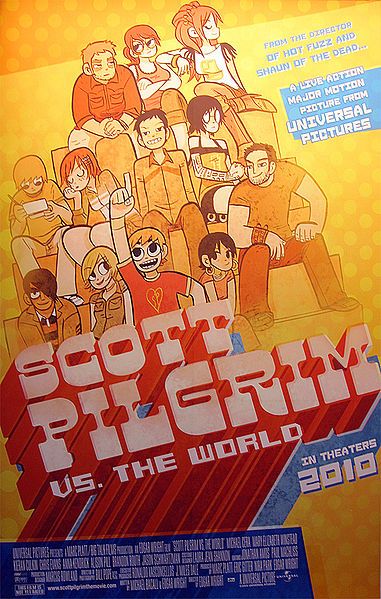 When Scott locks eyes with Ramona Flowers (Mary Elizabeth Winstead), he knows she’s the girl he wants to grow old with. But Ramona has some serious baggage; her supercharged exes rue the thought of her being with another man, and they’ll crush any guy who gives her a second glance.

Now, in order to win Ramona’s heart, Scott will do battle with everyone from vegan-powered rock gods to sinister skateboarders, never losing sight of his gorgeous goal as he pummels his way to victory.

Shaun of the Dead’s Edgar Wright directs the film from a script he penned with Michael Bacall. Superhero veterans Chris Evans and Brandon Routh co-star in the action comedy as two of the seven ex-boyfriends.

My Rating : 3/5 STAR
MovieStudio Quote >> “With awesome spellbinding SFX this flick forgets to entertain us with the plot!”

Walt Disney Studios, producer Jerry Bruckheimer and director Jon Turteltaub, the creators of the “National Treasure” franchise, present THE SORCERER’S APPRENTICE — an innovative and epic comedy adventure about a sorcerer and his hapless apprentice who are swept into the center of an ancient conflict between good and evil.

Balthazar Blake (NICOLAS CAGE) is a master sorcerer in modern-day Manhattan trying to defend the city from his arch-nemesis, Maxim Horvath (ALFRED MOLINA). Balthazar can’t do it alone, so he recruits Dave Stutler (JAY BARUCHEL), a seemingly average guy who demonstrates hidden potential, as his reluctant protege.

The sorcerer gives his unwilling accomplice a crash course in the art and science of magic, and together, these unlikely partners work to stop the forces of darkness. It’ll take all the courage Dave can muster to survive his training, save the city and get the girl as he becomes THE SORCERER’S APPRENTICE. 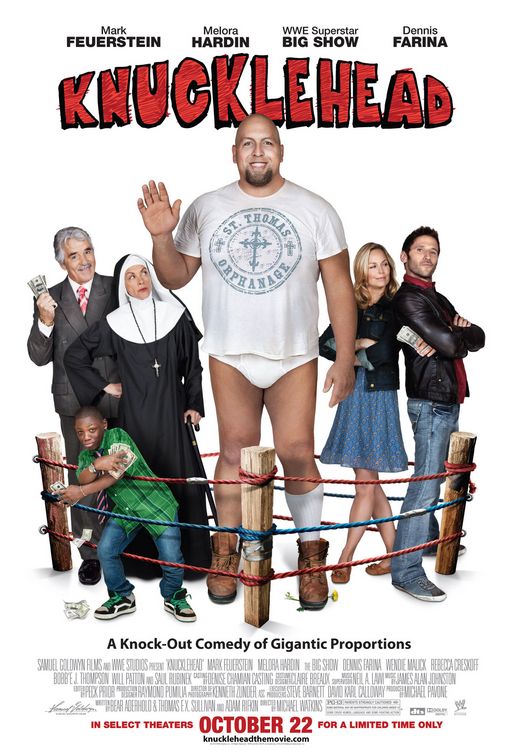 Walter’s orphanage-the only home he’s ever known-also needs funds desperately. Upon overhearing Walter’s predicament, Eddie convinces the no-nonsense head nun, Sister Francesca (Wendie Malick), that Walter can win the money as a fighter and pay off the church’s debts. Eddie’s plan: travel from town to town with Walter and enter small, unsanctioned fighting competitions for prize money Sister Francesca dispatches Mary (Melora Hardin) as a chaperone for both Walter and the money and gives Eddie a week – and a prayer – to make it happen.

During their journey across the south to the annual Pro-Am MMA tournament in New Orleans, Walter discovers what life is like outside the orphanage, while Eddie becomes morally conflicted over whether to take all the loot for himself or keep his promise to Walter, the one person he can actually call a friend.

Here is a tense, tautly wound penal drama, a kind of pocket A Prophet that charts the mis-education of three young tearaways at the Enola Vale correctional centre in Montana. 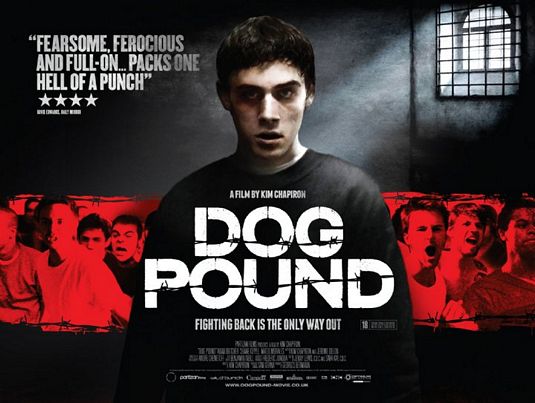 Perhaps this tells us nothing new about life on the inside in the US (there are rapes, riots and suicides), but it at least handles its brief with pace and precision. Director Kim Chapiron lines up his cast and lets them go, rattling through the yards and corridors where danger lurks at every turn. 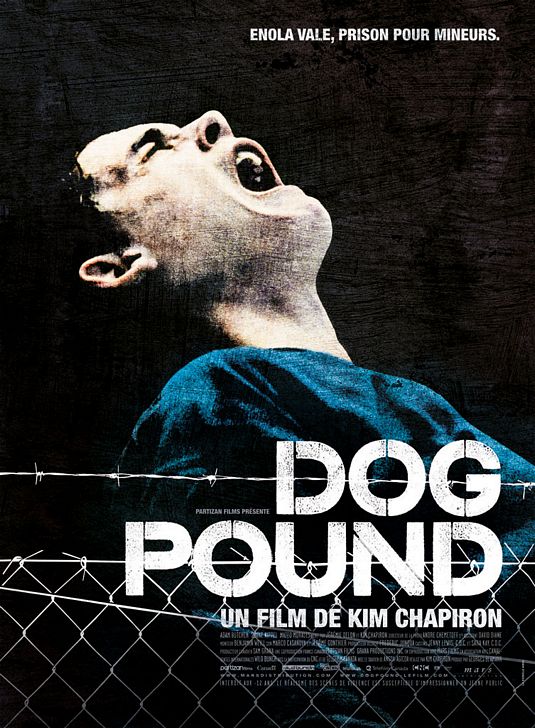 Angel (Mateo Morales) is a fallen innocent, Davis (Shane Kippel) a tattooed Oedipus and Butch (Adam Butcher) a lanky, charismatic hothead. All Butch has to do, he is told, is make it through two weeks without blotting his copybook; without manhandling a guard, say, or tenderising a rival’s face with a metal mug in the second-floor washroom. Somehow I don’t think he’s going to make it.

My Rating : 3/5 STAR
MovieStudio Quote >> “Felt like a Bollywood flick. The gores are damn realistic. Must see!”

Charly (Reno) retired from his job as a Marseilles mob boss to spend time with his family. But someone has it in for him, and after he survives being shot 22 times, Charly and a cop (Fois) start looking for who did it. Charly immediately turns to the other local bosses (Merad and Berry), childhood friends with whom he took a vow of loyalty.

But soon all-out war breaks out between thugs on various sides, and the division of loyalty isn’t as clear-cut as it should be. Reno is terrific in the role as a haunted man who knows he can never escape his violent past (“Spilled blood never dries,” he says).

He’s such a compelling central character that he holds our attention even as seemingly hundreds of other people crowd around him. It’s virtually impossible to keep track of who’s who and which side everyone’s on, but as Charly steadily moves through each scene, like the calm point in a storm, we feel like we’re in safe hands.

Danny, a respected cop, is setup after an investigation goes wrong. While laying low in his new jail cell, Danny is forced to get involved in the inmates underground cage fighting circuit.

With the help of Irving, a former mixed martial arts champion, Danny devises a scheme to bring justice and innocence to his family’s name, if he can get out of the cage alive.

Young police officer Shane Cooper relocates to the small country town of Red Hill with his pregnant wife Alice to start a family. But when news of a prison break sends the local law enforcement officers – led by the town’s ruling presence, Old Bill – into a panic, Shane’s first day on duty rapidly turns into a nightmare.

Enter Jimmy Conway, a convicted murderer serving life behind bars, who has returned to the isolated outpost seeking revenge. Now caught in the middle of what will become a terrifying and bloody confrontation, Shane will be forced to take the law into his own hands if he is to survive.

A taut thriller which unfolds over the course of a single day and night, and told with explosive action and chilling violence, Red Hill is a modern-day western played out against the extraordinary landscapes of high-country Australia.

Visionary filmmaker Christopher Nolan (Memento, The Dark Knight) writes and directs this psychological sci-fi action film about a thief who possesses the power to enter into the dreams of others. Dom Cobb (Leonardo DiCaprio) doesn’t steal things, he steals ideas. 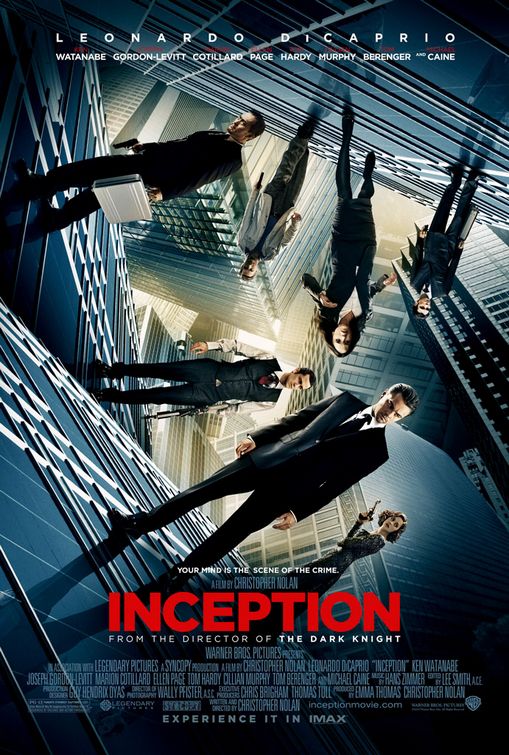 By projecting himself deep into the subconscious of his targets, he can glean information that even the best computer hackers can’t get to. In the world of corporate espionage, Cobb is the ultimate weapon. But even weapons have their weakness, and when Cobb loses everything, he’s forced to embark on one final mission in a desperate quest for redemption.

This time, Cobb won’t be harvesting an idea, but sowing one. Should he and his team of specialists succeed, they will have discovered a new frontier in the art of psychic espionage. They’ve planned everything to perfection, and they have all the tools to get the job done.

Their mission is complicated, however, by the sudden appearance of a malevolent foe that seems to know exactly what they’re up to, and precisely how to stop them.