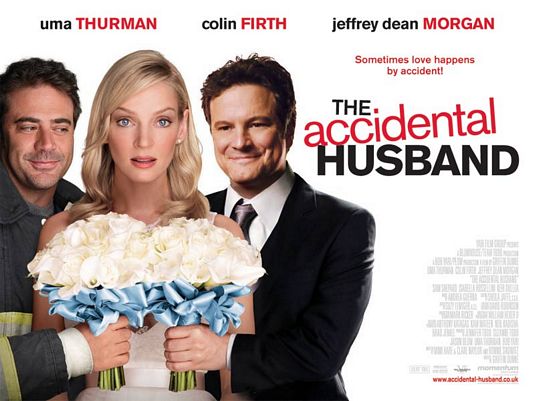 The no-nonsense, ever practical Dr. Lloyd questions Sophia’s concept of romantic love and advises her to break their engagement, which she swiftly does. 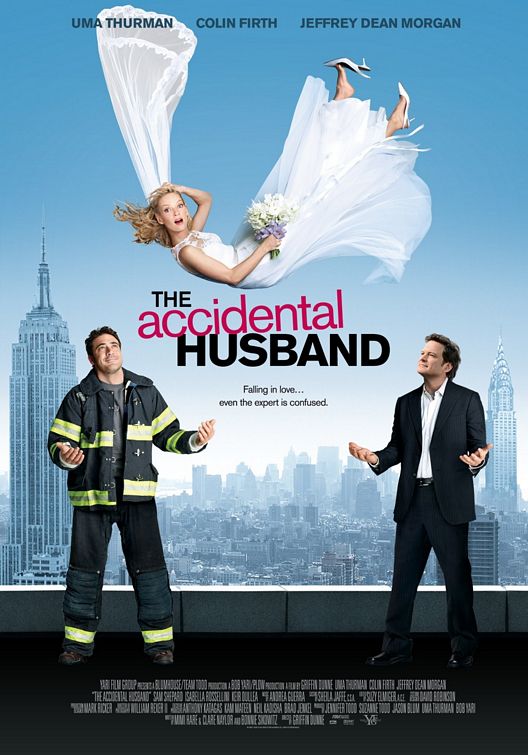 But when Patrick and his computer-savvy neighbor decide to give Dr. Lloyd a taste of her own medicine and “accidentally” join them in holy matrimony – something that doesn’t go over too well with her fiancée (played by Colin Firth) — it isn’t long before they learn that sometimes even an expert in love needs a second opinion…

MovieStudio Quote >> “Make sure the lights are off, it’s terrifying!” 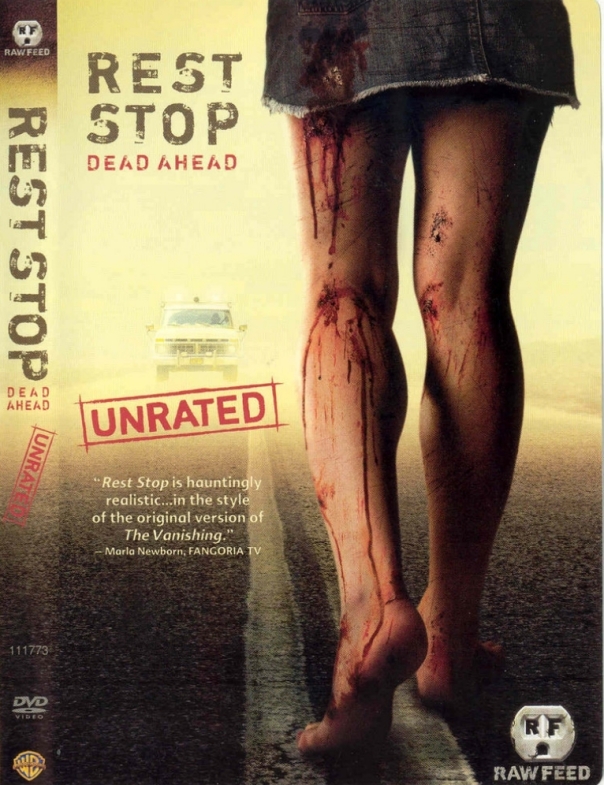 A rest stop provides a welcome break from the rigors of driving, but when Jess vanishes, Nicole comes face to face with a fearsome adversary who is armed to the teeth with weapons. 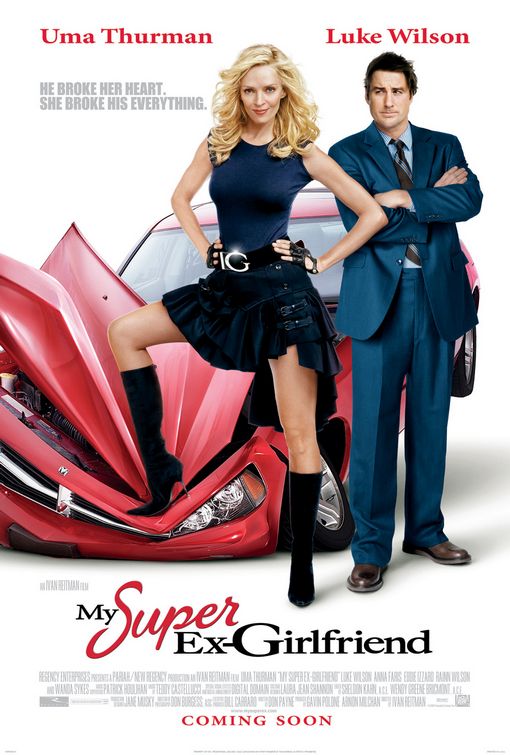 Breaking up with a superhero presents quite a few challenges, as Jenny readily cashes in on her inhuman strength for the purpose of getting even. Making things even more complicated are Matt’s best buddy, Vaughn (THE OFFICE’s Rainn Lewis), who is always there to offer relationship advice despite his unlucky ways with women, and possible love interest Hannah (Anna Faris). If being rejected by Matt doesn’t push her over the edge, Matt’s attempts to move on will, with things between Matt, Hannah, G-Girl, and her arch-nemesis, super villain Professor Bedlam (Eddie Izzard), erupting in an all-out war of supernatural proportions. 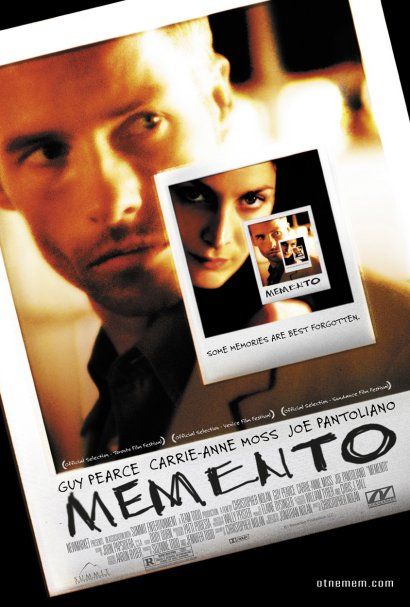 Although he can recall details of life before his “accident”, Leonard can’t remember what happened fifteen minutes ago, where he is, where he’s going or why. A former insurance investigator, Leonard is keenly aware of his handicap. Moreover, he’s got the discipline to compensate as well as the motivation-the cruel memory of his beloved wife’s last moments. Haunted by what he’s lost, he’s re-built his life out of index cards, photographs, file folders, charts, tattoos and obsessive habits that stand in for memory, fixing him in space and time and connecting him to his mission. Out of necessity, Leonard must rely on others despite being thoroughly ill-equipped to assess either their motives or basic decency. Leonard remembers his past-up to a point. But just who has Leonard become since losing the ability to hold together the fragments of himself? “Memento” mines this psychological terrain, using non-linear film narrative to mirror Leonard’s own effort to interpret the random pieces of evidence he hoards. The murder, rewound in the opening frames, we discover, is logically the endpoint of Leonard’s story. 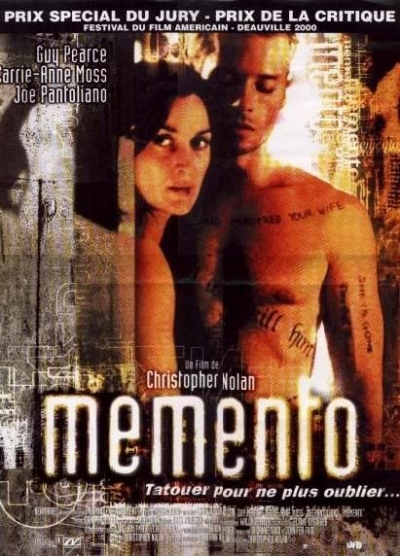 What we learn comes from a point earlier in time, a few moments and a few sentences prior to what we’ve already been shown. As Leonard’s story unfolds, the meaning of events changes. Allies, enemies, victims, victimizers swap place almost kaleidoscopically.

MovieStudio Quote >> “It’s funny and the music is great!”

Slovenly drummer Robert “Fish” Fishman (THE OFFICE’s Rainn Wilson) is booted out of his 1980s hair metal band, Vesuvius, right as they’re signed to a big label, crushing his dreams and leading to a 20-year stretch of office park employment. A second chance comes in the form of his overweight teenage keyboardist nephew (Josh Gad) who needs an emergency drummer for his band’s gig at the prom. It’s an odd match–an ’80s metal guy in a teen emo-lite band (their name is A.D.D.)–but he’s soon offering fatherly counsel to fatherless boy singer Curtis (Teddy Geiger), giving hair gel tips to the foxy bassist (Emma Stone), and working to get the band a club gig. Soon A.D.D. is signed to the same label as Vesuvius, poised for major MTV-stardom, all leading to a big arena spot as the opening band for the dreaded Vesuvius. 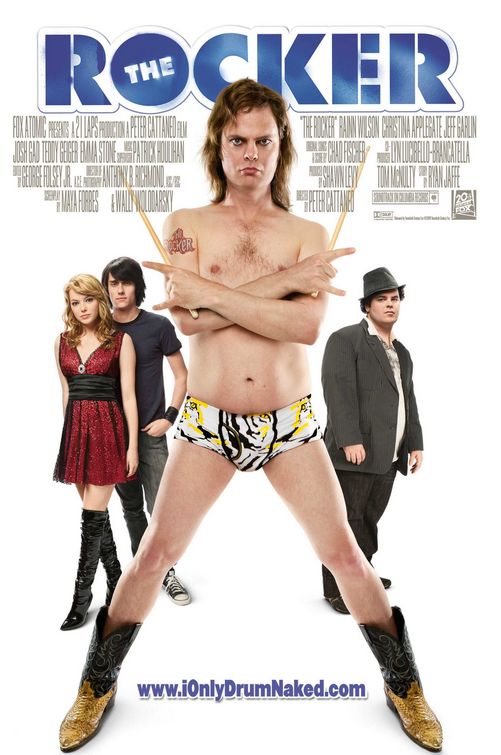 Fish needs to overcome his tantrum-throwing ways and step up to the kit, if he wants to impress Curtis’s hot mom (Christina Applegate) and outrock his former colleagues. A cross between rock star fantasia à la SCHOOL OF ROCK and the Will Ferrell School of man-child comedy, THE ROCKER benefits from tight editing and pretty decent songs. Real-life musician Geiger saves some rough stretches with his easygoing charisma, while Peter Best (the drummer dropped from the Beatles and hence the quintessential “dumped drummer”) makes a cameo. It’s directed by Peter Cattaneo of THE FULL MONTY

MovieStudio Quote >> “I never saw a true story so realistically made, this is a triumph!”

Prolific director Michael Winterbottom (24-HOUR PARTY PEOPLE) takes an unusual turn by helming A MIGHTY HEART–a studio picture starring none other than Angelina Jolie. Jolie stars as Mariane Pearl, the widow of WALL STREET JOURNAL reporter Daniel Pearl. Daniel was kidnapped and executed in Pakistan in 2002, and Winterbottom’s film centers on the frantic activities leading up to his death. 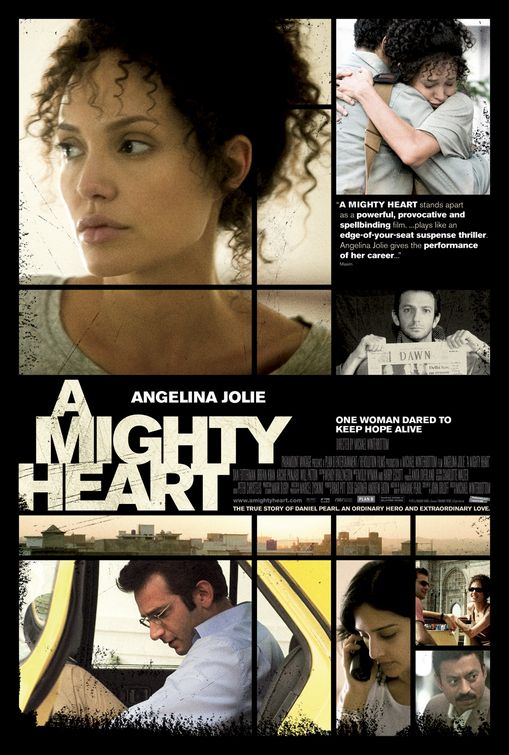 Fellow journalist Mariane revs into action as soon as the disappearance of her husband is announced, calling on the FBI and experts in terrorism to help in the desperate search. With the media circling around the story like hawks, Mariane endures a very public display of grief, and her plight is perfectly captured by the unlikely alliance of Winterbottom and Jolie. The film was shot mostly in Karachi and uses locations that Daniel was known to have visited, adding a heady dose of authenticity to the proceedings. 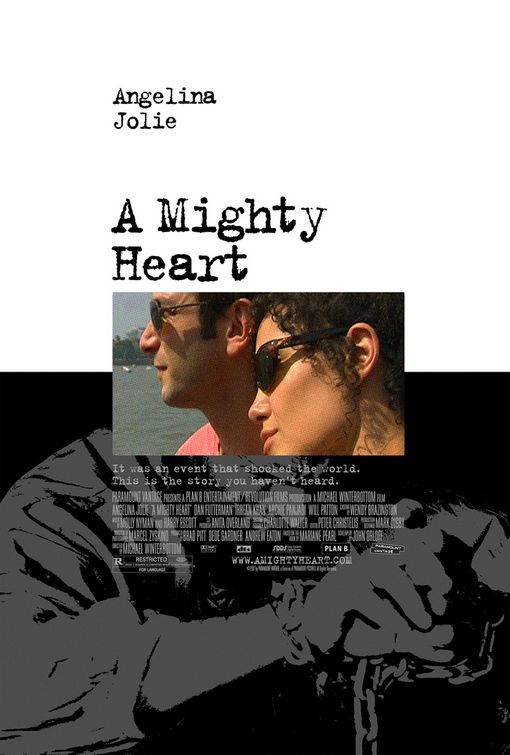 Winterbottom uses shaky, hand-held cameras, which add to the feeling of chaos as multiple organizations descend on Pakistan in the quest to find Daniel; fortunately the director uses some much-needed on-screen captions to make sure viewers are up to speed on who everyone is. A MIGHTY HEART is tough, emotional viewing that will be challenging (yet rewarding) for many audiences, even those who are already familiar with this heartbreaking story.

Dale and Ron, two fugitives on the run from a murder scene, take an agoraphobic art dealer hostage in his own home on a magnificent country estate. Soon they find themselves inferior participants in a game of survival. Dale, a stripper, is resentful of the way she has been treated in the past. 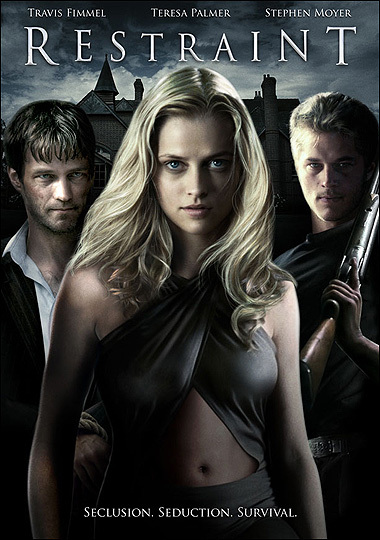 Their hostage, Andrew, represents everything she has always wanted but could never have. Ron, impulsive and out of control, loves Dale and will do whatever he can to take her away from her old life. Andrew, who has been living alone in his house since his fiancée disappeared six months prior, takes a perverse liking to his new found companions. He develops a competitive mate-ship with Ron and a desire to morph Dale into his former love. Let the game begin…

SLUMDOG MILLIONAIRE is a tightly woven story that has been expertly edited into shape. The contrast between Jamal’s upbringing and his chance of escaping it on the show are adeptly juxtaposed. Mumbai is portrayed as a place of terrifying poverty and unforgettable brutality, and Jamal and his brother get into a never-ending succession of challenging situations. But the way Boyle ties together Jamal’s life experiences with his answers on the show is quite brilliant, and the film really does run the full gamut of emotions as we see him growing up, falling in love, coming close to death, and teetering on the brink of escaping from his terrible predicament. The film belongs to Boyle’s cast, who are mostly unknown outside of India. Patel, in particular, gives a startlingly mature performance that audiences are likely to remember long after the credits role on this affecting feature.

MovieStudio Quote >> “Most Hilarious Comedy with a Funeral” 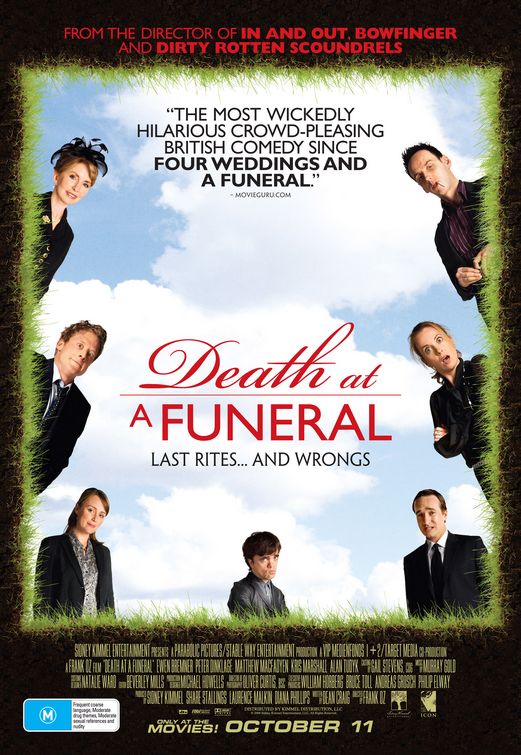 death at a funeral

Then comes the real shocker: a mysterious guest (PETER DINKLAGE) who threatens to unveil an earth-shattering family secret. As riotous mayhem and unfortunate mishaps ensue on every front, it is now up to the two brothers to hide the truth from their family and friends and figure out how to not only bury their dearly beloved, but the secret he’s been keeping. The film stars Matthew Macfadyen (Pride & Prejudice), Peter Dinklage (The Station Agent, Elf), Alan Tudyk (Firefly, Dodgeball: A True Underdog Story), Ewen Bremner (Trainspotting, Match Point), Rupert Graves (V for Vendetta). DEATH AT A FUNERAL is directed by Frank Oz and written by Dean Craig. The producers are Sidney Kimmel, Lawrence Malkin, Diana Phillips and Share Stallings. The executive producers are Philip Elway, Andreas Grosch, William Horberg and Bruce Toll. Josh Kesselman, Alex Lewis and Bruce Webb are co-producers.

Patrick “McDreamy” Dempsey leads this big-budget romantic comedy, making optimal use of his many swoon-inducing charms. Dempsey is Tom, a wealthy womanizer living the high life in New York City. He happily hops from bed to bed, living by a firm set of rules that keeps him from becoming romantically entangled with anyone. The only woman he makes time for is his dear college friend, Hannah (Michelle Monaghan), whom he sees weekly, and whom he adores. When Hannah suddenly takes off for Scotland on a job assignment, Tom misses her terribly, and has a dramatic realization about their relationship. 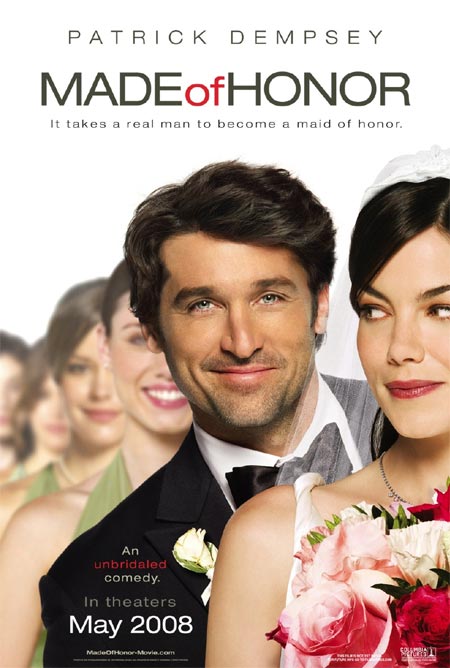 He makes a plan to tell her about it as soon as she gets back, but of course she returns with a handsome Scottish fiancé (Kevin McKidd) in tow. To make matters worse, she informs Tom that she must make wedding plans rather quickly, and would he please, please, please be her Maid of Honor? In typical rom-com fashion, the tale quickly escalates into over-the-top, barely believable plot twists, forcing the viewer to turn a blind eye to any holes in the story and instead focus on the pretty clothes and Dempsey’s dimples. It shifts into full-on fantasy mode, with rugged lads on horseback, Scottish castles, and gargantuan New York apartments that only Bill Gates himself could afford. Monaghan is likeable and lovely in her role as the confused bride, but the star here is undoubtedly Dempsey. Despite being cast as a slick Casanova, he still manages to exude the fumbling charm from his CAN’T BUY ME LOVE days. His non-threatening grin will likely be put on repeat at slumber parties everywhere, charming yet another generation of teenage girls.